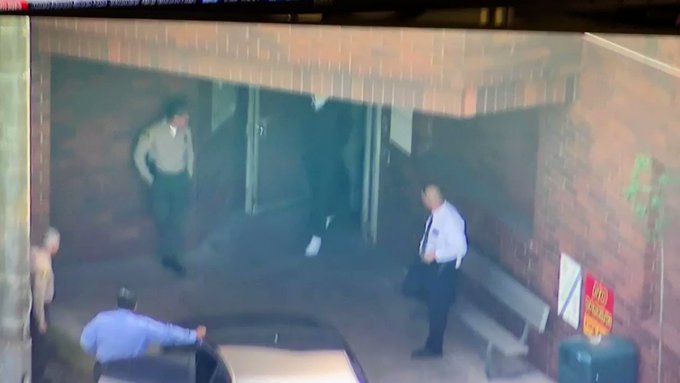 2:25 PM PT — Law enforcement sources tell TMZ, murder suspect Eric Holder is in custody. The man arrested early Tuesday afternoon is in fact Holder, who is suspected of murdering Nipsey Hussle. The woman who is the suspected getaway driver reportedly turned herself in.

1:35 PM PT — A man matching Eric Holder’s description has reportedly been captured in the L.A. suburb of Bellflower.

Law enforcement sources tell us L.A. County Sheriff’s Dept. deputies nabbed him around 12:53 PM in the 9000 block of Artesia Blvd.

We’re told he’s been detained for now, and LAPD is responding to make a positive ID. Dispatch audio TMZ has obtained identifies a “possible 187 suspect,” meaning homicide suspect. They then confirm they have a detainee in custody, matching Holder’s description.

9:33 AM PT — The LAPD’s presser just wrapped, and a number of details in the Nipsey murder case were revealed. One of the most intriguing was an email that either Nipsey himself or someone at Roc Nation sent to L.A. Police Commissioner Steve Soboroff, which he read publicly.

As we reported, Nipsey wanted to get together with the police to work on ways to prevent gang violence in his neighborhood.

The email read, “Our goal is to work with the department to help improve communication, relationships and work toward changing the culture and dialogue between LAPD and the inner city. We want to hear about your new program and your goals for the department, as well as how we can help stop gang violence.”

Soboroff says the meeting will happen in honor of Nipsey whenever his family and Roc Nation are ready to do it.

LAPD Police Chief Michel Moore says he doesn’t believe Nipsey’s murder — allegedly carried out at the hands of Eric Holder — was gang-related per se … in that it wasn’t a conflict between rival gangs. Moore says there was a personal dispute between them.

Chief Moore urged Holder to surrender, and anyone with information about his whereabouts to come forward.

8:00 AM PT — The LAPD will hold a news conference at 8:30 AM PT to reveal developments in the case. We will be live streaming.

Cops think they have the guy who murdered Nipsey Hussle … because they just named him as a suspect and apparently have issued an arrest warrant.

The LAPD says, “Eric Holder is wanted for the homicide in the shooting of Nipsey Hussle. He was last seen in a 2016 white 4 door Chevy Cruze, CA license plate 7RJD742. Anyone with information related to his whereabouts or this deadly shooting is urged to contact South Bureau Homicide at 323 786-5100.”

Our law enforcement sources tell TMZ, at the time of this post they have not located Holder who goes by the street name “Shitty.”

We broke the story … Nipsey was brutally murdered Sunday afternoon in Los Angeles, where he was gunned down outside his clothing store in the Hyde Park neighborhood. The Crenshaw rapper was pronounced dead at the hospital after paramedics performed CPR at the murder scene and during the ambulance ride. The L.A. County Medical Coroner says Nipsey died from gunshot wounds to his head and torso. Two other people were shot, but they survived.

Nipsey was murdered in view of a surveillance camera, and footage shows the shooter — the man in the dark shirt — opening fire 3 different times on Nipsey before kicking his body and fleeing toward a back alley.

Our sources tell us sometime before the shooting, “Shitty” had a tense exchange with Nipsey. We’re told Nipsey asked him if he had snitched to cops in the past, because that was the word around town. We’re told “Shitty” felt disrespected, left to grab a gun … then allegedly returned to get revenge.

Police previously described the shooter as a black male in his 20s, and cops believe he escaped in a vehicle with a woman behind the wheel.

As we reported … Nipsey had planned to meet with LAPD brass Monday — ironically, to talk about gang violence prevention.

In a strange twist … Nipsey seems to have alluded to “enemies” in a tweet posted to his account just before the shooting. He wrote, “Having strong enemies is a blessing.”

Former Los Angeles Lakers star Jordan Clarkson went on a nightclub rant after the murder,  grabbing the mic at a Scottsdale nightclub for a heartfelt speech on gun and gang violence.

T.I. told us why he thinks Nipsey was murdered because of envy and hate … while The Game said he was dumbfounded by the fact Nipsey was gunned down in his own hood.

Nipsey had been dating Lauren London since at least 2015, when she got pregnant with the couple’s first child. Lauren has yet to say anything publicly since the shooting.

Jacqueline Avant Suspect Shot Himself in Foot with AR-15, Arrest Seen on Video