While you were barbecuing and catching up on sleep over the holiday weekend, Snoop Dogg was busy making history and breaking records – with none other than gin and juice by his side.

Sippin’ on this gin and juice drink would probably take a small army to finish, with Guinness confirming the cocktail measured in at more than 132 gallons.

Snoop Dogg stirs the world’s largest paradise cocktail after adding gin to it on a culinary stage at the BottleRock Napa Valley music festival in Napa, Calif., alongside Top Chef Michael Voltaggio. A Guinness World Records official was on hand to certify the record of the 550 liter cocktail. (Photo: ERIC RISBERG/AP)

The drink contained 180 bottles of gin, 154 bottles of apricot brandy and 38 jugs of orange juice, according to Guinness. And it just wouldn’t be a paradise cocktail without a pink umbrella and a giant straw, which Snoop used to mix up the boozy beverage. 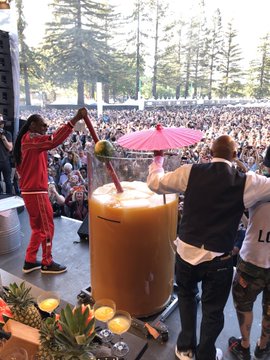 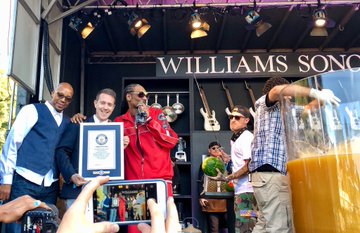 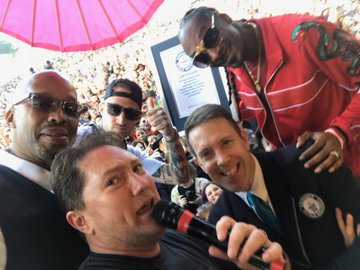 The cocktail contained 180 bottles of Hendricks gin, 154 bottles of apricot brandy and 38 3.78 litre jugs of orange juice, topped with a giant drinking straw, pink parasol and a garnish of pineapple and melon on a sword.

18 people are talking about this

As for Snoop, he celebrated on Instagram, posting a photo of him on stage with the drink and Voltaggio, simply captioning it: “Gin and juice world record.”