NIPSEY HUSSLEDEAD AT 33 …After Getting Shot in LA

7:50 PM PT — Somebody is already claiming to have been the one who shot and killed Nipsey Hussle. An artist by the name of Cinco says he was in Instagram Live Sunday after news broke that Nipsey had been shot. He says in the middle of his Live session, a young man under the username @gasstongbo hopped on with his own video and said he was the shooter.

Check out the interaction … the guy says he literally walked up on Nipsey and shot him in front of his “daughter.” Nipsey was photographed right before the shooting in the presence of a young child, but it’s unclear if that was his kid or not.

We should make clear … we do NOT know if this is the same man police have ID’d as the suspect in the case. It’s simply someone who is making a claim to the crime.

6:02 PM PT — Our sources are clear … this appears to be gang-related to the law enforcement officers that are working the case.

5:46 PM PT — Law enforcement sources tell TMZ  … the suspect cops are looking for is a black male in his 20s. We’re told he approached Nipsey and co. by foot Sunday afternoon and fired multiple shots … only to depart right after in what we’re told appeared to be a nearby waiting vehicle with a separate driver, who our sources say was female.

5:12 PM PT — Our law enforcement sources tell TMZ … Nipsey Hussle has died. He was 33 years old. He’s survived by his two children and his girlfriend, Lauren London, with whom he just had a child in 2016.

4:32 PM PT — Law enforcement sources tell TMZ … 3 people were shot at Nipsey’s store, and one of those people just died at the hospital. It’s unclear if that person is Nipsey. We’re being told that one man fled in a vehicle after the shooting.

Nipsey Hussle was just shot in LA … TMZ has learned.

Multiple sources tell us the rapper was gunned down Sunday in the Hyde Park neighborhood of Los Angeles, south of the Crenshaw area. We’re told he was at his clothing company called the Marathon Store. He opened the place back in 2017.

His condition is unknown at this point, but eyewitnesses say they heard multiple shots fired. Police and paramedics have swarmed the area and taped off the crime scene.

Nipsey appears to have received CPR on the scene as well. Videos are circulating showing him receiving CPR from an EMT, who’s doing chest compressions.

What’s crazy … Nipsey seems to have tweeted right before the shooting, and alluded to “enemies.” He wrote, “Having strong enemies is a blessing.”

Having strong enemies is a blessing.

111K people are talking about this

Nipsey — who’s from the Crenshaw area of LA — is said to have ties to the Crips. That hasn’t stopped him from working with artists who have rival gang affiliations … he’s made music with both YG and The Game — both of whom have been tied to Bloods.

He’s released multiple mixtapes over the course of his 10-plus year career but just dropped his first studio album last year. It’s called “Victory Lap” … and it got him a Grammy nod for Best Rap Album just a month ago. Nipsey lost out to Cardi B at the award show.

Nipsey’s mixtapes date back to to 2005. He dropped 10 projects independently before releasing his debut album, which was distributed through his own record label, All Money In, and Atlantic Records.

Despite being a polished rapper, Nipsey was no stranger to the streets. He got roped into a brawl out in West Hollywood back in December of 2018 … which turned out to be a case of mistaken identity.

This isn’t the first time trouble has descended onto Nipsey’s store either. Gunfire erupted there back in September of 2018, but no one was shot then. Nipsey was not at the store that time.

Nipsey was incredibly involved in his local community, in which he worked to prevent gang violence. He helped spear a major art initiative in his home neighborhood called “Destination Crenshaw” — a 1.3-mile open-air museum that will feature local art.

He also recently helped launch Vector 90 — a Crenshaw district based STEM learning center and workspace dedicated to developing science and technology education in the area.

During a showcasing of Vector 90 last year, Nipsey told the LA Times … “I grew up in gang culture. We dealt with death, with murder. It was like living in a war zone, where people die on these blocks and everybody is a little bit immune to it. I guess they call it post-traumatic stress, when you have people that have been at war for such a long time. I think L.A. suffers from that because it’s not normal yet we embrace it like it is after a while.”

Nipsey has been dating Lauren London since at least 2015, when she got pregnant with their child. They kept a low profile as a couple, but stirred up engagement rumors when they did a coordinated shoot for GQ back in January … where they were wearing matching white outfits.

Speaking of GQ, Nipsey and Lauren had worked with them quite recently by doing a “Couples Quiz,” which just got released a few days ago. 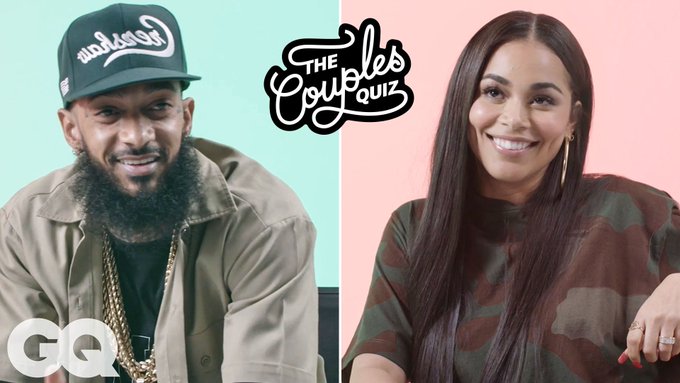 Arbery’s mother: “I knew that we would come out with a...