Director John Singleton died Monday at the age of 51.

The Oscar-nominated filmmaker behind Boyz n the Hood, Poetic Justice and 2 Fast 2 Furious had been hospitalized in Los Angeles after suffering a major stroke on April 17.

There was some confusion earlier Monday after Fox4 in Kansas City reported that he had died. However, a Singleton’s publicist Shannon Barr told Yahoo, “John is still on life support. That reporting is inaccurate.” Soon after, Barr said the family made the “agonizing decision” to remove him from life support.

“It is with heavy hearts we announce that our beloved son, father and friend, John Daniel Singleton will be taken off of life support today,” his family said in a statement, which can be read here. “This was an agonizing decision, one that our family made, over a number of days, with the careful counsel of John’s doctors.”

Singleton’s death was confirmed by his agents at ICM Partners. 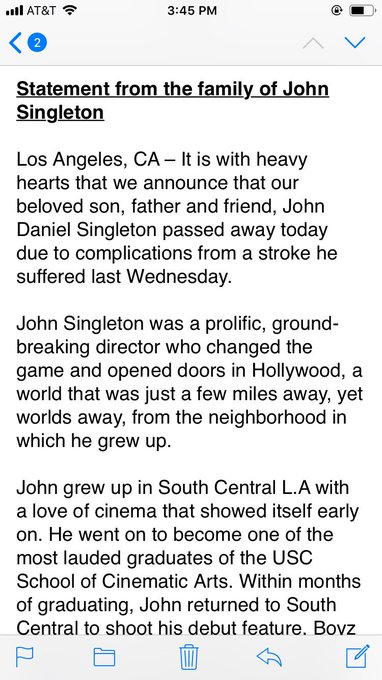 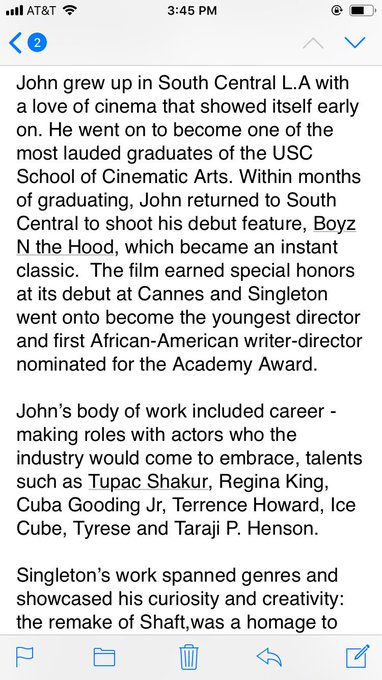 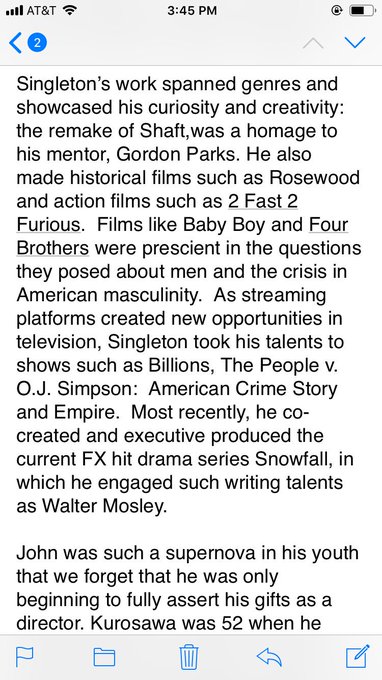 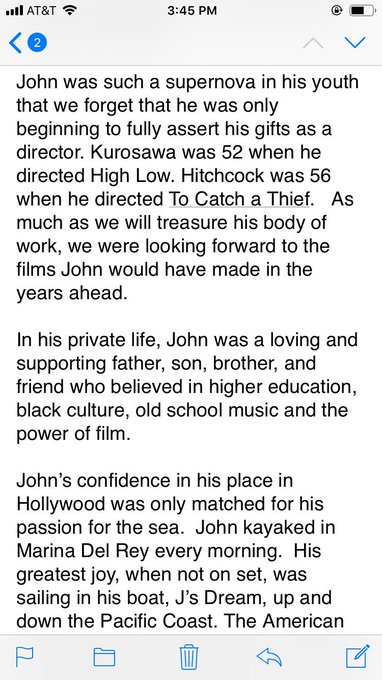 JUST IN: ICM Partners Statement from the family of Director John Singleton. #RIPJohnSingleton

Singleton was described as “a prolific, ground-breaking director who changed the game and opened doors in Hollywood, a world that was just a few miles away, yet worlds away, from the neighborhood in which he grew up” in the family’s statement.

The filmmaker exploded on the scene with his writing and directing debut, 1991’s Boyz n the Hood, for which he received Academy Award nominations for Best Director and Best Screenplay. The directorial nod made him the first African American — and the youngest person, at 24 — to have been nominated for the award. The gut-wrenching urban drama, focusing on the struggles of young men in South Central Los Angeles, starred Cuba Gooding Jr., Ice Cube, Angela Bassett and Laurence Fishburne.

In his four-star review, Roger Ebert called Boyz n the Hood “one of the best American films of recent years,” adding “the movie is a thoughtful, realistic look at a young man’s coming of age, and also a human drama of rare power — Academy Award material. Singleton is a director who brings together two attributes not always found in the same film: He has a subject, and he has a style. The film is not only important, but also a joy to watch, because his camera is so confident and he wins such natural performances from his actors.”

Boyz n the Hood was selected for preservation in the National Film Registry by the U.S. Library of Congress in 2002.

Higher Learning (1995) looked at heated race relations on a fictional college campus and starred Omar Epps, Kristy Swanson, Michael Rapaport, Ice Cube and Laurence Fishburne. “It’s chock full of everything that would concern young people: lesbianism, and racism, and everything I could put in that movie,” Singleton said of the film years later.

The 1997 historical drama Rosewood followed a 1923 massacre in which a white mob attacked the black residents of the titular Florida town. The film featured Ving Rhames, Jon Voight and Don Cheadle, and garnered the writer-director his best reviews since Boyz.

Singleton toward more commercial action fare in the late ’90s and early ’00s, rebooting the blaxploitation favorite Shaft(2000) with Samuel L. Jackson, helming the first sequel to The Fast and the Furious, 2003’s 2 Fast 2 Furious, and bringing Mark Wahlberg, Tyrese Gibson, Garrett Hedlund, and OutKast’s Andre Benjamin together in Four Brothers. He also directed Gibson in Baby Boy (2001) and Taylor Lautner in Abduction (2011).

Singleton’s family thanked his “fans, friends and colleagues for the outpour of love and prayers during this incredibly difficult time” as well as his doctors at Cedars Sinai “for the impeccable care he received.” It also noted that details about memorial services will be provided at a later date.

Singleton fell ill upon return to L.A. from a trip to Costa Rica and was hospitalized. While under medical care, he suffered a stroke, which was initially described as “mild,” but it apparently wasn’t. He was comatose and in the ICU.

His mother, Sheila Ward, who is also Singleton’s personal and business manager, filed to become his conservator last week, exposing the extent of his health problems. However, his adult daughter, Cleopatra Singleton, made her own filing stating Ward was “misrepresenting” the movie maker’s medical condition and said he wasn’t in a coma and was “progressing every day.” She added that he was “breathing on his own” and “has even smiled on many occasions.”

“John was such a supernova in his youth that we forget that he was only beginning to fully assert his gifts as a director,” his family said in the statement. Kurosawa was 52 when he directed High Low. Hitchcock was 56 when he directed To Catch a Thief. As much as we will treasure his body of work, we were looking forward to the films John would have made in the years ahead.”