After months of rumors, Beyoncé and JAY-Z have announced a joint tour. The first date of the “On the Run 2” Tour was listed today on Beyoncé’s Facebook and Ticketmaster pages. (Both have since been deleted.) The listing said the concert takes place on Monday, July 30 at Philadelphia’s Lincoln Financial Field. See the event listing below. Pitchfork has contacted Beyoncé and JAY-Z’s respective representatives for more information. It’s the first time the couple has toured together since 2014’s On the Run Tour when they played shows behind Beyoncé and Magna Carta Holy Grail.

JAY and Bey recently released the video for “Family Feud,” their Grammy-nominated collab from JAY-Z’s 4:44. 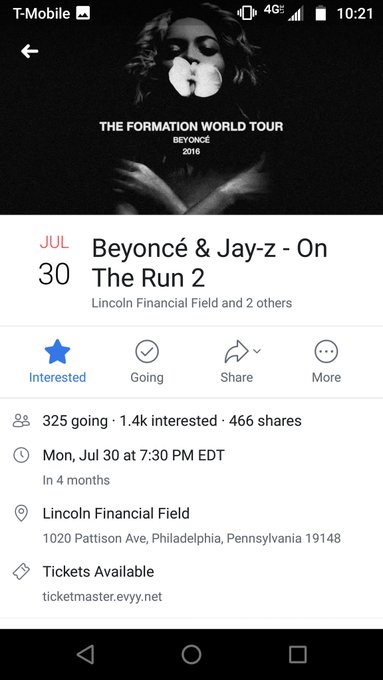 Can someone gift me tickets to on the run 2?